Name:Luke Henderson
CodeName:Zero
Good/Bad or Neutral:Bad
Appearence:Avi
Bio: As a child luke lived in england being loved and cared after his parents his father taught him taijutsu and karate and other arts and his mother taught him about weaponary when they moved to Gotham and moved into their new home luke was 14 and a month after his 14 his parents were killed in a car crash and luke made a promise that he would protect the World from the Heroes as they were the ones who killed his parents
Power/weapons or abillities:inheaced speed strenght and stamia with kunia shuikens and ninja wire with explosives notes and ninja smoke bombs
How you became good/bad:Bad
Work in a team or alone:team in making at the moment alnoe
Loctation of where you are or your base:Gotham H.I.V.E 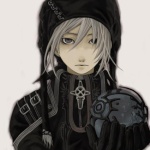