Bio: Minerva was born nineteen years ago to two loving parents she just never known anything that she could knon she is called goddess of legends she just didn't know why she just wondered why she was called that. She even doesn't know what her father meant by that her mother died of birth complications, and her father died of a broken heart. Minerva doesn't know her last name or what she is her father never got around of telling her he just told her that she is a goddess of legends whatever that meant. She just didn't know what planet she was born she looks like humans, but she isn't human. She doesn't know where she was born she was never told of her birth not once she was just told she was born of a life that shouldn't been. She just can't survive without the moon or the sun if she's in one or the other for too long she can die.
Power/weapons or abillities: crystal spear, judgment arrow, blinding white light transportation, and water healing
How you became good/bad: She's isn't good or bad she's just a mecenary
Work in a team or alone: alone
Loctation of where you are or your base: H.I.V.E. if i had to work for them otherwise I'm on the good side.

Re: Minerva ~a mysterious enigma mencenary~ 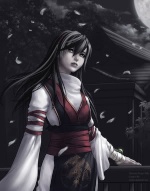